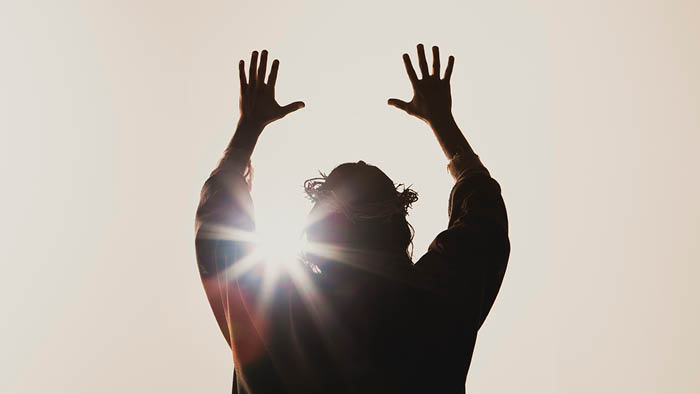 The Good News of Jesus’ Ascension

One of the most monumental steps humanity has ever taken was when Neil Armstrong first set foot on the moon. What had previously only been the stuff of dreams had now been accomplished for all humanity: humanity had finally made it to the moon. In Armstrong’s own words, “That’s one small step for a man, one giant leap for mankind.”

But as monumental as that step was, it is only a small picture of a far, far greater human step: when Jesus ascended into heaven and stepped into the presence of God.

According to Acts 1:3, following his resurrection, “[Jesus] presented himself alive to them after his suffering by many proofs, appearing to them during forty days….” It was on the 40th day after His resurrection that Acts 1:9 tells us, “as they were looking on, [Jesus] was lifted up, and a cloud took him out of their sight.”

It sounds very weird to us. None of us have ever seen someone ascend into the clouds like this, but let’s not let the weirdness of this keep us from understanding the tremendous significance of what it means.

In the Bible, clouds often symbolize God’s presence. When Moses ascended Mount Sinai, clouds covered the mountain (Exodus 24:15). When Moses entered the tent of meeting, a pillar of cloud would descend and the Lord would speak with Moses (Exodus 33:9). But when Jesus ascended, he did not merely enter a tent or go up a mountain. He went into heaven itself, the true place where God resides.

The ascension has tremendous implications, not just for Jesus, but for all who identify with Him. Let’s consider some of the blessings that come to us from the ascended Lord.

The ascension gives us confidence before God.

Once a year on the Day of Atonement, Israel’s high priest would enter the Most Holy Place in the tabernacle to offer a sacrifice before the Lord (Leviticus 16). As he entered, he would be wearing a breastplate with 12 stones on it, symbolizing the 12 tribes of Israel (Exodus 28). In this way, year after year, the priest would represent the people and bring them into God’s presence, providing a covering for their sin.

But according to the book of Hebrews, Jesus is our great high priest. Unlike Israel’s earlier high priests however, Jesus has offered a perfect sacrifice, once for all time, and appears before God as our priest forever. And because Jesus is human, He is able to represent us before God. We can say that as Jesus appears now before God, He carries us on His heart, and has our name on His lips. This gives us great confidence before God, because our security before God is as secure as Jesus himself.

The ascension gives us courage on earth.

As the ascended Lord, Jesus is seated “…far above all rule and authority and power and dominion, and above every name that is named, not only in this age but also in the one to come” (Ephesians 1:21). What this means is that Jesus is not just Lord over the church, or in our hearts, or over the spiritual realm; Jesus is Lord over all creation – every time period, every person, every nation, and every realm. The rulers of this world may think they are at the top, but they would be wrong. Whether or not people recognize it, Jesus is the King of kings to whom all are accountable.

This is the courage and boldness the apostles and the early church had as they proclaimed Jesus in the face of persecution and opposition (Acts 4). Since our Lord is the Lord over all creation, we need not tremble before any power or any circumstance, come what may. We must not shrink back from faithfully and boldly following Jesus in every sector of life without compromise. And because Jesus is the ascended Lord, we may do this no matter the pressures or opposition we face.

The ascension gives us comfort in sorrow.

One of the frustrations we may feel with our leaders and those in authority is that they seem so unrelatable. They don’t know what it’s like to be one of us. How can I trust them to represent what’s best for me? But when we find leaders who have gone through the same things as we have and can truly sympathize with us, we find ourselves placing our hopes and trust in them. They know what it’s like, and they know what we need.

The ascension of Jesus gives great comfort for those who feel sorrow. In Jesus, the Son of God became flesh and lived like one of us. He fully experienced the traumas and scars that come from life in this broken world (Hebrews 4:15). And when He ascended, He did not leave His flesh behind but took it with Him, forever identified with humanity. So for those who bear the scars of life, take heart, because the One who rules the cosmos is one who bears scars.

The ascension gives us hope for our future.

When God created our first parents, Adam and Eve, He made them in His own image and entrusted them to rule over creation with care (Genesis 1:27-28). Humanity was intended for greatness, but with the introduction of sin, we have fallen terribly short of the glory that was supposed to be ours. Even our best moments are still tainted in some way by brokenness. It is a great tragedy, because we were made for so much more.

But in the ascension of Jesus, we see a glimpse of humanity as it was intended to be. When we see the ascended Jesus, we see a picture of our future. In their book, The Ascension: Humanity in the Presence of God, authors Tim Chester and Jonny Woodrow explain: