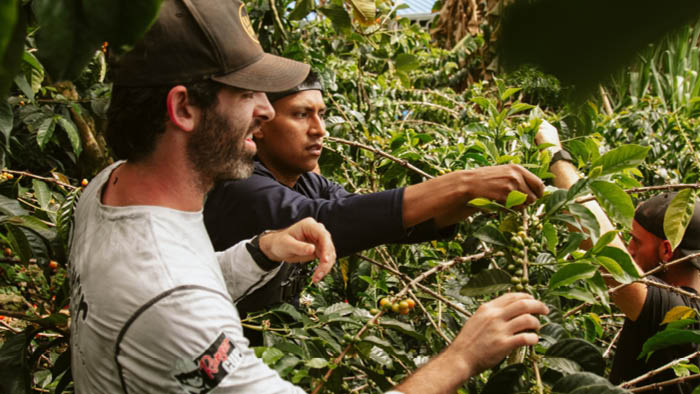 Where Does It Come From?

Behind every product is a person. Behind every purchase, every consumable, every dish and drink, garment and gas tank, car and cell phone — behind everything we use and abuse and cherish — is a person who made it. A person just like you.

But, where does it come from?

I certainly didn’t care about this question for most of my adult life, mostly because I didn’t think about it. That started to change when I got to Kansas City in 2019 and found that everything’s about supporting local business!

Then my world was blown open when I became a small business owner of a coffee company.

Now my first question became: where does my coffee come from?

A couple of friends approached me about becoming entrepreneurs. We tried a bunch of things — exercise programs, creative services, website design — but our constantly evolving mission statement kept coming back to the same thing: we wanted to help people. Whether it was solving a problem or growing a brand, we felt we had a skill set that could benefit others.

Then we started talking with Ervin Liz. He took entrepreneurship classes with my business partner back in college and then went back to his home in Colombia, South America to start a coffee business.

Ervin had seen first hand the poverty of Indigenous coffee farmers and the brokenness of the coffee industry. His parents are farmers, and they were forced to cut down their coffee trees in 2010 because they could not make ends meet. In fact, many in their native Nasa community struggle with this burden due to unfair coffee prices and large coffee producers. So, Ervin built a business selling directly to the consumers in Colombia. By taking out the “middleman” and providing fair prices for high-quality coffee, he was able to pay farmers more.

Ervin ultimately had a growing demand from US consumers, and he needed help expanding. We suggested doing some marketing, but instead he invited us on as owners — people with a real stake in this thing, and Native Root Coffee was born. Plus, the coffee was really good, so we couldn’t say no.

What he may not have realized at the time is that valuing people, planet, and profit actually aligns really well with our faith.

As creatures made in God’s image and charged with His creation, we have incredible worth and responsibility — not only to our own bodies (1 Corinthians 6:19-20) but also to others, especially the vulnerable (Matthew 25:44-45). Businesses have power through money and influence, and it’s a decision maker’s responsibility to do right by humanity.

God made humankind stewards of the earth (Genesis 1:28) but everyone and everything in the universe still belongs to Him (Psalm 24:1). Just as we are made in God’s image, His creation clearly bears His signature (Romans 1:20) and it should be honored in kind.

While the Bible says a lot about money and greed, it also makes it clear that those who sow bountifully will also reap bountifully (2 Corinthians 9:6) — it all depends on what you sow. The parable of the talents (Matthew 25:14-30) describes investing God’s gifts as a way to create greater things. If a business uses profits to invest in people and the planet, it sows goodness.

Meeting the people behind the coffee

So, where does our coffee come from? Before Native Root, I thought I was fancy by buying the imported German coffee at Aldi for $5, as opposed to the breakfast blend for $3. But the focus was inward — I wanted yummy coffee for myself; that’s it.

Then, Ervin invited us to meet the farmers — first through photos, and then in person.

Our team made the trek to the Togoima Reservation in Colombia, which is about 10 hours south of Bogotá by overnight bus. We got to experience the farm and meet the people first hand. Ervin’s parents, Ana and Isidro, greeted us with limited words — because they spoke the native language Nasa Yuwe — but with unlimited hospitality.

I have so many stories about our visit that I’d love to share with you if we meet in person. When we left Colombia, we could not stop thinking about the people we’d met — how they interacted with their environment, the hospitality they exuded, and the ways we hoped to help them.

First and foremost, we pay our farmers. They work the hardest, they produce the coffee, and yet so often they can’t make enough money to live on. Our model pays them higher prices for high-quality beans, and then an additional 10-15% more. Ervin’s parents had to chop down most of their coffee trees because they couldn’t make a living. Now, his parents are thriving — they’ve nearly finished a new house with processing capabilities.

This business model was built with people in mind. When unfair trade is the basic business model, entire communities suffer. These Indigenous farmers are vulnerable to dips in the market, big middlemen who swallow profit, and a lack of resources for major infrastructural improvements. In many ways their community is their strength. Native Root pours into this community with both relationships and resources. We get to know each of our partnered farmers. Our founder Ervin, along with our Colombia CEO, Alcides, physically meet with each farmer to instill intentionality and dignity across the mountain communities. Some of the funds are also used to build up members of our network. Our company raised funds to build an elderly woman a home after her kids left. We also formed relationships with farmers in a nearby reservation who have historically encountered poor access and political turmoil. It’s our goal and our dream to continue building relationships and pouring into more Indigenous communities.

Coffee prices shot through the roof recently due to a bean shortage in Brazil. Unusual and extreme weather decimated their coffee crop. The earth’s wellbeing is vital, both for the grand scale of humanity, and for the micro scale of our coffee farms. That’s why we employ sustainable and organic practices. For example, when the seeds are extracted from the cherry, the fruit pulp is reused as a natural fertilizer. The parchment, which is the thin, papery coating around the bean, is usually considered another “waste” product. We use it as fuel for bean drying machinery. Finally, we use a software program to counter our shipping carbon emissions. Shipping is calculated as a monetary number, which is then paid toward conservation efforts. Our contributions of this effort are set up for the Acapa – Bajo Mira y Frontera Forest Conservation Project in Colombia.

So, where does your coffee come from?

Take a deep breath. It’d be nearly impossible to know who made each and every product you use — and less so the motives behind their actions. You’re not a bad person if you don’t know the person behind your soap dispenser (but now I’m curious).

My goal is to increase intentionality. To increase awareness of the products I interact with daily, like my morning coffee.

Where does it come from? Ask, and find out.

Travis Meier attends Christ Community’s Downtown Campus. On Sundays you can usually find him playing bass on the worship team with Aleah Eldridge or sitting with his fiancee, Sarah. He also writes for a local publication called KCtoday, and plays the saxophone in a community band called the Kansas City Wind Symphony.

For more information about Native Root you can visit nativerootcoffee.com