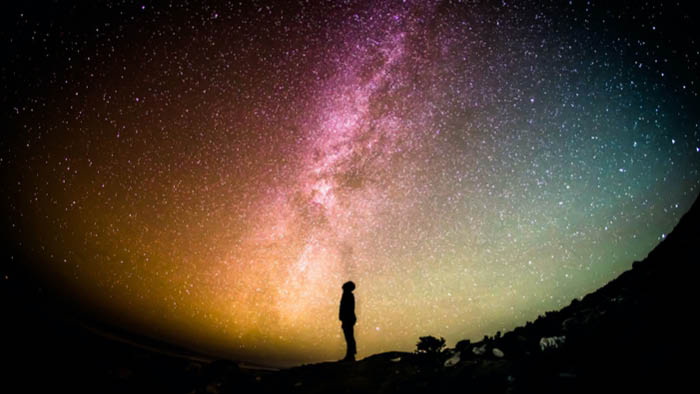 I jumped off the boat and into the lake, my skin grateful for the cool of the water. I floated, face up, and closed my eyes. The sun burned red through the lids. There was no gravity, no up or down, or east or west, and my thoughts sailed off in the light breeze. All my cares melted away like the clouds in the afternoon heat.

Then it touched me. My body coiled and wrenched my mind back to earth. I kicked my legs,  swiveled my neck, eyes darting down into the darkness around me. Something icy, slick, and fast had slithered up my back.

Try as I might, I could not see more than a few inches below the surface. I couldn’t see my own feet, straining up against gravity’s slow snare. A sick feeling bloomed in my stomach and oozed to my fingers and toes. A feeling of smallness. A sense of incomprehensibility. A dread for the shapeless and nameless things that might lay below. I swam hard for the boat.

Later, I gave the feeling a name: horror.

Some version of this horror has probably found you, too. It creeps up from the darkness of the deep water. It steals in through the telescope pointed out into the emptiness of space. It falls down on the head looking up from the feet of mountains. It’s not the horror of Jason in slasher movies like Halloween. It’s not the cheap thrill of The Exorcist. It’s not even the suffocating fear of human depravity like Rear Window or Psycho. It’s the horror of the unknown – or more precisely – the unknowable.

H.P. Lovecraft made a living on this form of horror. You may or may not know the name, but you’ve probably felt his influence. He is widely known as the father of cosmic horror, a sub-genre that does not so much play to our fears of death or pain, but to more existential dreads about our place in the universe, our smallness in comparison, and the sheer incomprehensibility of it all.

It is an effective form of horror because it is so deeply rooted in the human experience. It is, in fact, a form of horror we encounter in the biblical story. When Moses and the people come to Mount Sinai in Exodus 19, Israel meets the living God like this:

[16] On the morning of the third day there were thunders and lightnings and a thick cloud on the mountain and a very loud trumpet blast, so that all the people in the camp trembled. [17] Then Moses brought the people out of the camp to meet God, and they took their stand at the foot of the mountain. [18] Now Mount Sinai was wrapped in smoke because the LORD had descended on it in fire. The smoke of it went up like the smoke of a kiln, and the whole mountain trembled greatly. [19] And as the sound of the trumpet grew louder and louder, Moses spoke, and God answered him in thunder. [20] The LORD came down on Mount Sinai, to the top of the mountain. And the LORD called Moses to the top of the mountain, and Moses went up. [21] And the LORD said to Moses, “Go down and warn the people, lest they break through to the LORD to look and many of them perish.”

The sense of the story is terror inducing. To the ancient mind (and perhaps the modern one as well), a mountain was as permanent and as awesome as it gets. This is why so many places of worship were set atop a mountain. When God descends to Sinai in Exodus 19, and seems to consume it with fire, the people tremble at the power of God, who is bigger, and older, and higher even than the mountains themselves. It’s almost incomprehensible. It’s horror on a cosmic scale.

The story is a reminder that God is, in the Lovecraftian sense, horrifying. To actually see God as he is, what he is capable of, his purposes and plans laid bare to our eyes, would obliterate us. When Isaiah is transported in a vision to God’s throne room (Isaiah 6:1-5), he is not fascinated or awe-inspired. He is undone. Lovecraft would approve.

It is important, as I’ve reflected on this, to understand the horror of God. Not because he wants to hurt us or scare us, but because he is unknowable to us. He is higher, and deeper, and wider, and older than we are, and even older than the stars and the planets. The vastness of space still teaches the same lesson that Sinai did; who is this God even the quarks and the photons obey?

If God were to turn our horror to awe, or even to worship, he would need to reveal himself, hide himself, in something much smaller, something weaker, something very much like a person. Something like Jesus of Nazareth. This is, after all, how the author of Hebrews understood the incarnation in chapter 12:

[18] For you have not come to what may be touched, a blazing fire and darkness and gloom and a tempest [19] and the sound of a trumpet and a voice whose words made the hearers beg that no further messages be spoken to them…[22] But you have come to Mount Zion and to the city of the living God, the heavenly Jerusalem, and to innumerable angels in festal gathering, [23] and to the assembly of the firstborn who are enrolled in heaven, and to God, the judge of all, and to the spirits of the righteous made perfect, [24] and to Jesus, the mediator of a new covenant, and to the sprinkled blood that speaks a better word than the blood of Abel.

The Old and New Testaments, when read together, equally affirm how thin the line is between horror and worship. The whole thing ultimately pivots on the incarnation of Jesus. He is, in a sense, the line. He is the Word made flesh, the fire and lightning become skin, the unknowable made touchable.

Lovecraft is only half-right: there is a dread just beyond our conscious thought that, when it slithers up our backs, can evoke a horror unlike almost any other, and that horror is a holy God in the presence of a sinful person. But in Jesus, our God reveals himself not to be the boogeyman, but the Son of Man; we do not fully know him, but he fully knows us. And when we finally see this “monster,” he does not confirm our worst fears, but defeats them. And our horror becomes awe. And our awe becomes love. And our love becomes worship.