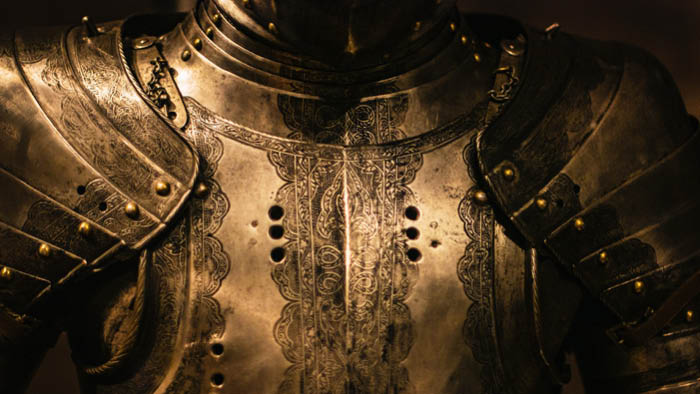 Equipped: How Role Playing Games Prepared Me for the Reality of Spiritual Warfare

I grew up in a normal home (albeit broken, like all of us), but was never equipped with anything beyond a naturalistic, or maybe vaguely dualistic, view of the world. I thought what I saw was all there was, until people died; then there was heaven. But who knew what that was about? It seemed no one knew.

The primary formative experiences giving me any sense of transcendence, or spirituality then, as odd as it sounds, were playing fantasy games like Zelda, Warcraft, or Diablo with my friends. I forged weapons and armor, battled dark forces of evil, and rescued allies from fire and death.

We were children equipped with the imaginations to rule the world (or at least our front yard), enacting this RPG-instilled transcendence IRL (in real life).

Eventually, I did what I thought I had to do: I gave up childish ways. I stopped playing “those games.” Not coincidentally, this is also when a more staunch naturalistic worldview began to settle upon my perception of the world.

Then a sandal-wearing, unarmed, slain Jesus walks into my life who is also now and forever the victorious, living King (Revelation 5:5-6). He obliterated my mistaken sense of self and sense of the world, and spoke words into my heart which the Spirit wielded like a sword to divide up the mess inside me, clear away the debris, and gave me new life (Hebrews 4:12, John 3:3-6). Jesus came to live inside me to empower me from the inside out by his Spirit. He invaded the territory of my life and sent me out to proclaim the excellencies of his glorious reign (1 Peter 2:9). My naturalistic perception became spiritual: as I came to understand that reality is more than what is seen.

The apostle of our King (1 Corinthians 15:8), Paul writes to us of King Jesus’ equipping of his “saints,” his people-made-holy (Ephesians 4:12). This equipping occurs as a result of Jesus’ ascension–what some scholars have called his “ascension gifting” to the church. His ascension declares Jesus’ utter, overpowering victory against the spiritual powers of evil: having taken them captive, he now leads the captive forces in procession before his people. Then he divides the spoils among them, among us (Ephesians 4:7-11). The gifts of victory that Jesus gives us are precisely those associated with the giving of his indwelling Spirit (see Ephesians 3:16). Pentecost was the King’s victory prize bestowed upon his people (Acts 2:33).

The subject of Holy Spirit-equipped living can be traced all throughout the book of Ephesians and reaches its climax in chapter 6. We are caught up in a cosmic battle, “not…against flesh and blood, but against the rulers, against the authorities, against the cosmic powers over this present darkness…” And if you weren’t convinced that Paul is talking primarily about the influence of personal, spiritual, demonic evil rather than merely worldly, political power alone, he sums up our battle as “against the spiritual forces of evil in the heavenly places.” (Ephesians 6:12). These are the same spiritual entities over which Christ reigns supreme and to which the gathered people of God make known God’s manifold wisdom (Ephesians 1:21, 3:10).

Paul clearly states in Ephesians 2:1-3 that a biblically-formed and fully-orbed gospel includes within it this cosmic conflict. The reality of humanity becoming free from our sinful flesh is not about improving poor choices, but about defending against the influence of personal, spiritual evil on our minds and on the world around us. This passage is a quintessential example of the ancient framework of the unholy trinity, “the world, the flesh, and the devil,” which wages war against the Triune God and his image-bearers.

John Mark Comer has done fine work reinvigorating our understanding of this ancient framework in his book Live No Lies. While admitting the reality of paranormal, overtly charismatic experiences such as power encounters and exorcisms, Comer speaks of the reality of spiritual warfare, especially in the non-majority world, primarily taking place in the realm of evil ideas (the flesh), implanted by the lies of a personal Enemy (the devil, see John 8:44), that then become normalized in a sinful society (the world).

We are at war with evil, but that war is more often a battle for the human imagination, as a primary route to the heart, than it is for the outward actions that flow from the heart. Capture our minds, covertly and “behind Enemy lines” as it were, convincing us to rationalize “small sins” as long as we’re not obviously engaging in rampant wickedness, and the enemy gains a stronghold in our hearts that’s frankly much harder to resist than an overt, all-out frontal assault (2 Corinthians 10:3-5).

C.S. Lewis is in full accord in Screwtape Letters, his masterful imaginative account of an arch-demon’s advice to his underling tempter-apprentice:

You will say that these are very small sins; and doubtless, like all young tempters, you are anxious to be able to report spectacular wickedness. But do remember, the only thing that matters is the extent to which you separate the man from the Enemy [God]. It does not matter how small the sins are provided that their cumulative effect is to edge the man away from the Light and out into the Nothing. Murder is no better than cards if cards can do the trick. Indeed the safest road to Hell is the gradual one–the gentle slope, soft underfoot, without sudden turnings, without milestones, without signposts.

This safe road to hell is paved, not with good intentions (as the saying goes), but rather with captured imaginations, minds that have been vacated of the reality of the spiritual weightiness of thinking itself, of every thought, however minute a thought it may seem.

Stand Against the Darkness

How are we, then, to actually engage in this battle against the evil seeking to ensnare our minds and hearts, and thus our lives? In the face of this cosmic conflict, Paul’s heraldic conclusion to the church in Ephesus is to stand, he repeats three times. Then, recalling an Hebraic, prophetic formula, to be equipped, taking up the God-ordained instruments for spiritual battle (Epesians. 6:13-14, c.f. Isaiah 59:17). Having donned the necessary accoutrements, each encapsulating a necessary quality for, one might say, “defense against the dark arts” (Ephesians 6:14-17), we are then sent forth to… what? To vanquish our opponents? No; rather, Paul’s climactic commission into the fray is simply this: pray (Ephesians 6:18). This is how we stand firm together against the darkness.

It is indeed a collective commission. Paul, as throughout Ephesians, is calling the church, the Body and Bride of Christ, to be thus equipped (Ephesians 1:22-23, 5:26-27). She is to become a veritable fortress of her God, clothed and crowned with her King’s gracious splendor (Revelation 12:1, 19:7-8, 21:2). Praying together is thus mission-critical, and all the more as the final Day draws nearer (Hebrews 10:25). Our charge is not to obtain victory–that has already been accomplished through the cross and empty tomb–but to stand firm by defending that victory for one another until its fullness comes rushing in on the hoofbeats of the King’s return (Revelation 19:11-16).

Prayer is essential. If we stand alone, without God’s supernatural strengthening and the combined power of our allies, we’re dead where we stand. Paul begins the whole section on God’s armor by calling us to “be strong in the Lord and in the strength of this might.” (Ephesians 6:10). The essential battle practice of prayer is confirmed by Graham Cole, former Dean of Trinity Evangelical Divinity School and professor of Systematic Theology: “Prayer rounds out the [armor], and in a way it returns the reader to the beginning, that is, to God, in whom the believer is to be strong. The practice of prayer is to suffuse the whole…The armor of God is not enough without the God of the armor, and prayer is the link.” (Against the Darkness, 169).

Beloved, we are in a spiritual battle. Spiritual warfare is very real indeed, much more real and substantial, that is, having a bearing on the substance of our daily lives, than many of the things we think of as real and substantial such as various religio-political ideals, socio-cultural norms, or gender stereotypes. That there is personal evil out there, influencing our minds and cultural systems and attempting to deceive and destroy us, is a radically non-postmodern notion.

And yet, isn’t this much of the appeal of Tolkien’s legacy of high fantasy? There is a personal evil that seeks to “steal, kill, and destroy”–call it a “Dark Lord” and his forces (John 10:10). And there is the persevering banner of “the Light” that all peoples of good will gather under in an alliance against evil (Ephesians 5:8).

We are undoubtedly not formed to think in this way about our world today, excepting, I think, in the widespread popularity of RPGs. Role-playing fantasy games, when staying true to their Tolkien-formed, biblically-saturated roots, provide categories, affirmed in Scripture, with which to see the reality that, if we follow Christ as King, we have been drafted into the Son’s kingdom of light to ever resist Satan’s kingdom of darkness (Colossians 1:13, 1 Peter 5:8-9).

Let us therefore be unwavering to “take up the shield of faith…and the sword of Spirit, which is the Word of God” (Ephesians 6:16-17) and to “keep alert with all perseverance” in prayerful fellowship with our Spirit-wrought allies, not hesitating to embrace the radical idea of a real, personal, yet immaterial battle of Light vs. Darkness (Ephesians 6:18). Let us skillfully handle the Word of Truth, embodied in Christ and revealed in Scripture, declaring it boldly as if our lives and the lives of others depended on it (2 Timothy 2:15, Ephesians 6:20). Because, in reality, they do (John 1:1-14).