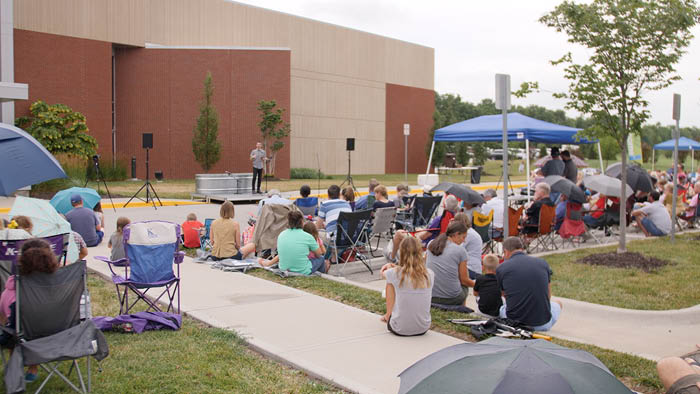 Baptism: A Matter of Life and Death

Our church family gathered recently to celebrate and witness a number of people profess their faith through baptism. It was wonderful to be together with so many congregants from our five campuses and their loved ones!

Indeed, what exactly is baptism all about? Let’s find out…

What happens in baptism is a matter of life and death. I know that is a bold statement, so let me unpack it, beginning with the second part.

There is a death we must die.

One of the most famous verses in the Bible is Romans 6:23, which begins “For the wages of sin is death.”

The wages of sin is death. Now sin is an especially religious word. We don’t hear it used much outside of religious contexts, and if we do, it’s something like, “It would have been a sin not to have indulged in a slice of that extra rich chocolate cake.”

But simply put, here’s what sin is in the Bible: sin is when we choose our way instead of God’s way. Sin is when God instructs us in the right way, but we decide it would be right to do something else instead.

And Romans 6:23 says that the wages of sin is death. What does this mean? Well, when you go to work and do your job, the wages your boss gives you is a paycheck. But when we work for sin, the wages it pays us is death.

The first time the word “sin” appears in the Bible, it’s likened to a vicious animal that is waiting to devour someone (Genesis 4:7). And according to the Bible, humanity has made a deal with sin. We’ve decided to work for sin. So like a vicious animal, sin has in turn devoured us. We have chosen to do things our way instead of God’s, and sin has given us our wages; death.

If we have eyes to see it, we see this death all around us—all of the brokenness we see in the world and the disconnection from ourselves, one another, and from God that we feel—this is all a kind of death. This is where we find ourselves. This is the normal human condition. We often speak about our condition as a kind of death when we say things such as, “It kills me inside to think about…” or, “When I heard the news, I died inside.”

This darkness, disconnection, and death characterize life in this world, and according to the Bible, it’s all because of sin. And this spiritual death we feel eventually culminates in literal, physical death. These are the wages we have earned. There is a death we must die.

But here’s where the good news comes in. There is a death that leads to life, and if that death becomes your death, you will live.

That death was the death of Jesus Christ on behalf of sinners.

What this means is that though Jesus never sinned, by dying on the cross, He identified Himself with sinners. It means that the wages Jesus received were not the wages He deserved, but the wages we deserve. And so it means that if we are united with Jesus, when He died, we died with Him!

This means that on the cross, Jesus fully immersed himself into our darkness, our disconnection, and ultimately, into our death. In doing so He has brought sin to the death it deserves so that we can escape sin’s destruction. It means that Jesus’ death can be our death.

There is a life we must live.

Romans 6:23 begins, “For the wages of sin is death,” but as the second half of the verse explains, “but the free gift of God is eternal life in Christ Jesus our Lord.” So just as there is a death we must die, so there is a life we must live.

When Jesus rose again to life, His new kind of life burst into creation, and is available to all who are united to Him. Because Jesus has united Himself to us and shared in our death, we may be united with Him and share in His life.

The Bible speaks of this union in a way that is so close that it is as if we are completely immersed into who Jesus is. When a man and woman are united in marriage, they often say in their vows, “All that I am I give you, and all that I have I share with you.” As they are united, they unite their poverty and their riches. And as we are united with Jesus, we come to share in both His death and His life.

This union with Jesus, and therefore His death and life, is what we celebrated as we witnessed  people get baptized a few Sundays ago. What these baptisms proclaimed is not that being immersed into water saves them, but that these people have already been immersed into Jesus, and that’s what saves them.

Water baptism is a symbol of this real identity, union, and immersion into Jesus (Romans 6:3-4). As we are immersed in the water, we proclaim that we have been immersed into Jesus’ death, have died to our old way of life, and are choosing to die to sin in our daily experience. And as we rise from the water, we show that we were raised with Jesus, and that we share in and seek to live His new kind of life.

There is a death we must die, and there is a life we must live, and that death and life may be ours as we are immersed into Jesus.

If you have been united to Jesus by faith but have not been baptized, keep an eye out for the next time our church celebrates baptism, and consider participating.

If you are unsure of what to make of Jesus, consider the Bible’s claims on the human condition and the matter of life and death that is before each one of us.

If you would like to talk and learn more, please reach out to a pastor at one of our campuses.

Baptism is a symbol of this very real matter of life and death. Through baptism we celebrate and demonstrate our union with Jesus, and that:
All Jesus is He gives to us, and all that He has He shares with us.
Whatever the future holds, Jesus will love us and stand by us,
As long as He shall live –- forever and ever.