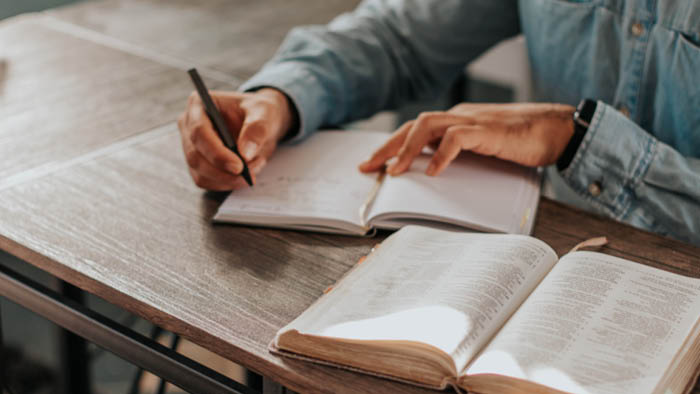 Why We Are Not Preaching on the Woman Caught in Adultery

This week as we continue our series through the Gospel of John, you might notice that we have skipped over the story of “The Woman Caught in Adultery” (John 7:53-8:11). You may even be disappointed as this is one of your favorite stories about Jesus. I’m with you! I love this story because it presents so vividly both Jesus’ compassion and boldness. Yet even though I like the story in this Scripture passage, we will not be preaching from it. Let me explain why by first giving some background about Scripture , and why we have confidence in the Bible as God’s Word.

What is the Bible?

Christ Community Church and the Evangelical Free Church of America (EFCA), the broader association of churches to which we belong, believes that God inspired the words  human authors wrote that have been gathered together into the Bible. According to our statement of faith, “We believe that God has spoken in the Scriptures, both Old and New Testaments, through the words of human authors. As the verbally inspired Word of God, the Bible is without error in the original writings….”

We believe this because Jesus, as the truest revelation of God (John 1:14-18; Hebrews 1:1-3), endorsed the entire Hebrew Bible (our Old Testament) as God’s Word that will never become void (Matthew 5:17-18; John 10:34-35). He even identifies the voice of the human author in Scripture as God’s own voice (Matthew 19:4-6; Mark 12:36). Jesus also authorized His disciples to produce authoritative teaching in line with His message that became our New Testament (John 10:27; 14:26). His earliest followers agreed in identifying all Scripture as originating in God and containing absolute truth (1 Timothy 3:15-17; 2 Peter 1:20-21). These biblical writings demonstrate themselves to be God’s Word. They were received as such by the earliest Christians, even as early as Peter viewing Paul’s writings to be as authoritative as the Hebrew Bible (1 Peter 3:15-16). From the beginning, to be a follower of Jesus is to build your life on God’s Word as found in the Bible. This book becomes the center of our gathered worship experience as we hear it read, sung, prayed, and preached over all of us together.

How do we know what is the Bible and what is not? This is why the original writings are so important. John’s Gospel is viewed as Scripture because it was written by an apostle, showed itself to be God’s Word, and was received by the early church as authoritative. If I added my own thoughts to the end of John’s Gospel, those additions would not be seen as part of the Bible and would not be viewed as God’s Word, no matter how insightful I might think they are! In a similar way, if people, even with good intentions, added extra stories or comments to a part of Scripture after it was already written and received by the church, those sections should not be considered as Scripture. Otherwise, the Bible wouldn’t distinctly be God’s Word.

How do we know what the original writings are?

We do not have John’s or any other biblical author’s original manuscript. That does not mean we have no clue about what their original writings included. We have many copies made by Christians throughout history that can be used to determine this. An entire field of scholarly study called “textual criticism” exists and people use their God-given talents to serve the broader church by comparing these manuscripts to determine which readings are more likely to be the original. To make a really complex discipline way too simple, when discrepancies between different copies are found, the reading that is found in the majority of the older copies is more likely to be the original reading. When this comparison is done, it becomes apparent which changes were done, either accidentally or intentionally. Even many of the intentional changes can be seen as misguided instead of malicious;  a copyist simply wanting to add a brief explanation to help readers or include something they mistakenly believed was originally in Scripture.

But before you start getting uneasy about whether we can still trust Scripture if there have been so many errors in copying it down throughout history, know this: after a few hundred years of serious scholarly criticism and discoveries of thousands of new manuscripts from centuries earlier and closer to the time of the early church, the changes to the Bible have been miniscule. There are only a handful of places (this passage, 1 John 5:6-7, and Mark 16:9-20) where a new discovery has substantially changed how a passage is read, and not a single Christian doctrine has been affected by these discoveries. So, we can be reasonably confident that the Bible we have is a trustworthy reflection of the original writings. Far from this scholarly inquiry and reason harming our faith, it has actually bolstered it, with the Bible displaying a much more reliable transmission history than any other ancient text.

What about “The Woman Caught in Adultery”?

Looking back at John 7:53-8:11, it is clear this story was not in John’s original gospel. Your Bible likely has brackets around this story with a note that says something like “The earliest manuscripts do not include 7:53-8:11.” This is because the only manuscript before the ninth century to include this story was one from the fifth century found in western Europe (further from where John wrote) and also deviates from earlier manuscripts in other key areas. Other copies from the tenth century onward that have it, often place it, or variations of it, in different places throughout the gospels. It only became more common in its current form and location in manuscripts dating from the Middle Ages.

On the other hand, every other early manuscript omits it, notably including two of the earliest and most reliable manuscripts, called Papyrus 66 and Papyrus 75 that date from the second or early third century and were found in Egypt (closer to where John wrote). Codex Sinaiticus, the oldest complete copy of the New Testament (c. 325 CE), does not include it either. No pastor or theologian from the eastern side of the early church references it until the tenth century. In their commentaries and sermons, they go directly from John 7:52 to 8:12 (keep in mind that current chapter and verse breakdowns were added later). Finally, all the earliest translations of the Greek New Testament (Syriac, Coptic, Armenian, Old Latin, and Georgian) skip this story as well.

Then how did it get in the Bible?

It is probably a true story about Jesus that His early followers passed around orally, but was not written down in one of our four gospels. This should not surprise us! John himself says that “Jesus did many other signs in the presence of the disciples, which are not written in this book” and this could be one of those (John 20:30). Papias of Hierapolis, a pastor who lived from 60 to 130 CE in Turkey, records a similar story in his writings that he had heard from others. As this story was told and retold between Christians, probably a scribe in the west really appreciated it (like me and so many others!) and sincerely or disingenuously thought it should be included in a biblical gospel. He or she probably added it to John 8 because it fits with Jesus not judging (verse 15). At the end of the chapter Jesus is about to be stoned (verse 59), so Jesus can be seen as taking the place of the sinful woman. Due to both a compelling story and sparse access to early copies of John, eventually it became the dominant reading by the time of the first English Bible translations.

What should we do with it?

There are so many stories of God working in the world that can encourage, challenge, and inspire us. These include writings by the Jewish people between the Old and New Testament, early Christian writings, church history, and experiences that you and I have today. There is nothing wrong with cherishing and learning from these stories. Most of them are probably true! According to the evidence we have, “The Woman Caught in Adultery” fits into this category.

However, as disciples of Jesus, we make a distinction between these stories, which may contain errors, and God’s Word that is without error in its original writings. The former stories certainly can be read privately and even referenced in public teaching, but they should not be read and affirmed as God’s Word by Christians gathered together. They are not a part of the Bible we build our life on, that is uniquely “to be believed in all that it teaches, obeyed all that it requires, and trusted in all that it promises.”

Evangelical Convictions: a Theological Exposition of the Statement of Faith of the Evangelical Free Church of America. Minneapolis, MN: Free Church Publications, 2011.

Blomberg, Craig. “The Reliability of the New Testament”. The Gospel Coalition.

Carson, D. A. The Gospel According to John. Leicester, England: Inter-Varsity Press, 1991.